Rihanna and ASAP Rocky are expecting their first child!

It’s Official! Rihanna and ASAP Rocky are expecting their first child together and we could not be happier for the couple.

The couple, who have been rumoured to have started dating at the end of 2020, was photographed on Monday while they were taking a stroll through New York, where Rihanna showed the world her growing baby bump from underneath an unbuttoned pink vintage Chanel coat, which she paired with a stunning multi-layered necklace and had a bright glow all over her face.

The 33-year-old had her hands placed in her jean pockets which showcased her blossoming baby bump even more, as she was trying to stay warm whilst bracing the freezing cold weather that has hit New York this past week.

Rocky was pictured embracing his pregnant partner by kissing her forehead.

The hot couple and soon-to-be-parents have not shared any further details about the gender of their baby or the expected arrival date.

Although the pregnancy does come as a surprise to many, not long ago there were rumours of Rihanna expecting her first child as she kept wearing loose jumpers and coats. One video on January 26th, showed Rihanna shopping at a Sephora cosmetics store in Manhattan, which led to further speculations that she was pregnant.

ASAP Rocky declared his love for Rihanna during an interview for GQ magazine that the Met-Gala Queen is ‘the one’. He stated that she is, ‘The love of my life. My lady,’ and continued by adding that ‘It’s so much better when you got the one.

He added that ‘She amounts to probably, like, a million of the other ones. I think when you know, you know. She’s the one.’

Rihanna had also spoken the British Vogue a year earlier, expressing her love and passion for motherhood. ‘They diminish you as a mother if there’s not a dad in your kids’ lives. But the only thing that matters is happiness, that’s the only healthy relationship between a parent and a child.

Celebrities who have Received the COVID-19 Vaccine

She continued adding,’ That’s the only thing that can raise a child truly, is love,’ she added, noting that she would also like three or four children.

The singer had also told Interview magazine that she wanted to be a mother ‘more than anything in life.

Her wish has finally come true…

A look back at the most jaw-dropping red carpet moments!

King Richard: The inspiration behind the biopic. 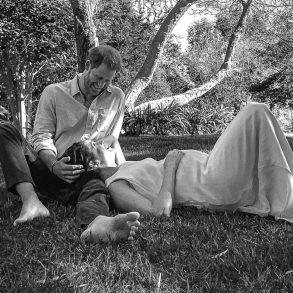 The good, the bad and the ugly, Red carpet moments at Hollywood’s Oscars.

Previous
A look back at the most jaw-dropping red carpet moments!

Next
Sidney Poitier: A look back at the Legend.